The new 3.7 release of the GLG Toolkit contains a number of new features, including:

The new feature extends functionality of Widget Palettes by allowing the user to create multi-segment pipes and lines by defining multiple points in the drawing, similar to the way polygons are created.

The new feature allows creating multi-segment 3D pipes and process-control lines with specific properties from predefined templates displayed as icons in the Widget Palette. The predefined templates may include animated flow lines and dynamic data-driven parameters. The new feature also supports constraining pipe points to other points in the drawing at the creation time.

A resource named "IsWidget" was also added to all widgets. The presence of this resource can be used to identify a widget in a program using the GLG API. 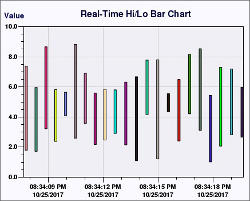 Several types of bar charts are now supported by the real-time chart object.  The PlotType attribute of a chart's plot can be set to either BAR or FLOATING BAR to render data samples as bars. A BAR plot displays bars that start at the bottom of the chart. A FLOATING BAR plot starts at the level defined by the plot's BarYLow attribute. If the plot's ExtendedData attribute is set to YES, each floating bar can start at a different level supplied by the BarYLow attribute.

A new feature was added to enable storing an extended set of attributes for rendering each data sample, making it possible to annotate bars and markers in a chart with different colors, marker sizes or marker types.

By default, each data sample stores only a limited number of data values, such as the sample value, time stamp, validity and marker visibility. This minimizes memory consumption and optimizes update performance for plots with large number of data samples. The rest of the attributes, such as bar fill color, marker size and type, etc., are global per plot and are used to render all data samples using current attribute values.

However, if a plot's ExtendedData attribute is set to YES, the plot keeps extended information for each data sample, including color and line attributes for bars and markers, bar fill type, marker type, etc.  For FLOATING BAR plots, the BarYLow value is also stored, which can be used to render both High and Low ranges for each bar.

If ExtendedData=YES, the marker and plot attributes listed above serve as entry points for supplying attributes to draw each sample. This may be used to draw markers and bars in different colors, and also to supply a different BarYLow value for each floating bar of a FLOATING BAR plot. If attribute values are not supplied for some data samples, the last supplied values will be used.

A time line object annotates a time stamp by drawing a vertical line at a specified time value. There are two modes of operation that are controlled by the value of the NumTimeLines attribute of the chart.

If the attribute value is greater than or equal to zero, it controls the number of persistent time lines in the chart. The chart automatically adds or deletes time lines when the value of the attribute is changed. Each time line is positioned by setting its Level attribute to the time stamp of the event that needs to be annotated.

If the attribute value is set to -1, the time lines can be added via the GlgAddTimeLine API method at run time. Added time lines are automatically deleted when the data sample closest to the time line falls out from the history buffer (due to the settings of the chart's BufferSize or BufferXSpan attribute). The GlgDeleteTimeLine method can also be used to delete individual time lines.

If the plot's AutoScaleDelta is set to a negative value, the absolute value of the attribute defines the auto-scale adjustment as the fraction of the current chart range.


Support for the Double-Click Event

Support for double-click was added to the action objects as well as the trace callback. The DoubleClick attribute of an action object can be used to differentiate between single and double click events, and execute an action only on a double click, a single click, or both.

The GlgGetModifierState method can also be invoked in either the Trace or Input callback with the GLG_DOUBLE_CLICK_MOD parameter to query the state of the double-click modifier. The method will return true if the callback was triggered by a double-click event.


Support for Anti-Aliased Fonts on Linux

Added support for anti-aliased fonts on Linux to improve appearance of text objects in the GLG drawing when rendered using the C/C++ library.  Previously, the anti-aliased text rendering was available only in Java, C# and also in C/C+ on Windows, but not in C/C++ on the Linux/Unix platforms.

The new font driver also provides a better support for the UTF-8 locale on Linux by using Fontconfig for defining font names. For example, the "Helvetica-12:bold" font name may be used for displaying text in any language supported on the system, while the old driver required to define a font set that contained a list of fonts to handle encodings for each required language.

The older font driver that uses the core (XLFD) X fonts is still available.  An application can select the type of the font driver by using either the GLG_XFT_FONTS environment variable, a command-line option (-glg-enable-xft-fonts or -glg-disable-xft-fonts), or by setting the GlgXftFonts global configuration resource via the API at run time.  Each font object in a font table contains both the X Font Name and the XFT Font Name, which will be used by the corresponding driver.

An application can also define the type of the font driver on a per-font basis by setting the font's XFontType attribute. The XftFonts attribute of a viewport's screen object can also be used to enable or disable XFT fonts for the viewport.

A new LocaleType attribute was added to a viewport's screen object to facilitate cross-platform handling of the UTF-8 and Latin1 locales on both Linux and Windows. The -reset-utf8-locale-flag and -set-locale-flag command-line options were also added to the gconvert utility for convenience of changing this attribute after the drawings were created.

The D From G transformation extracts an X, Y or Z coordinate (or an R, G or B color value) from a G data object containing a triplet of XYZ or RGB values, and stores the extracted value in a D data object.

The new transformations are used in the new Lat/Lon display indicators for extracting the Lat and Lon values from a G data object that supplies Lon as X and Lat as Y coordinate.

This new attribute controls resize behavior of a child viewport when its size changes by a small amount. If the attribute is set to NO, it prevents the viewport from resizing for changes in size less than one pixel. It improves scrolling performance of drawings that contain multiple viewports, such as the Builder's palettes. When a resizable drawing is scrolled, the size of children viewports may fluctuate by a fraction of a pixel due to the coordinate-to-pixel mapping, and the PresizeSize=NO setting prevents excessive repaint events due to viewport resizing.

A new GlgTooltipEraseDistance global configuration resource defines the maximum distance in pixels the mouse can move without erasing the currently displayed tooltip, which avoids erasing the tooltip on an accidental small mouse movement. The resource can be changed from the default value (5) to 1 for precise selection of real-time chart tooltips.

A new Force File Extensions option was added to all GLG editors. If enabled, it will add the ".g" extension to the filenames that have no extension.  The default setting can be configured using the ForceFileExtensions variable in the GLG configuration file.

The Public Properties toolbar icon is now enabled in all editors by default.

The Undo menu option now appears as a separate top-level menu, which allows to keep the state of the editing dialogs when performing an undo operation.

The new GlgFindMatchingObjects method can be used to find all children or parents of a given object that match selected criteria. This method can be used for finding TimeEntryPoint of a plot that corresponds to the plot's ValueEntryPoint, which makes it possible to supply value and time stamp pairs to a plot using a single tag added to the plot's ValueEntryPoint. The GLG SimpleViewer demo demonstrates this functionality.

The GlgTraverseObjects method can be used to traverse object hierarchy of a given object.

A new set of Installable Interface Handler Utilities assist an application developer with implementing functionality of complex user interactions usually encountered in editor-style applications. The utilities include a collection of methods as part of the GLG Intermediate API library and are available for the C/C++, Java and C#/.NET environments.

Installable Interface Handlers provide a mechanism for handling user interaction where persistency is necessary to handle interrelated sequences of user actions. The interface handlers are hierarchical, allowing an application to handle nested operations, such as nested dialogs or chained operations. Internally, a stack is used to maintain a hierarchy of handlers, making it possible to handle arbitrary nested sequences, for example display a confirmation dialog based on the action of the parent dialog (such as parent dialog closing).

Each handler maintains its own persistent data storage for intermediate data, which is automatically cleaned up when the handler is uninstalled. A variable number of dynamic parameters can be supplied to each handler to modify its behavior as needed.

Interface handlers extend functionality of event handling callbacks and listeners by providing event handlers that support persistency and provide data storage for intermediate data that control user interaction. An interface handler stays active to process all events for a dialog or a page, until the handler is uninstalled when dialog closes or a page is switched to display another page. The interface handlers provide a flexible alternative to the Hierarchical State Machines (HMS) that are often used to handle the state of the user interface transitions. Unlike HMS, interface handlers allow a developer to extend the handler functionality by adding handler parameters and augment the handler source code based on the parameter values passed to it, which could be easier than adding new states to the state machine.

The GLG Diagram Demo was rewritten to use these new methods. It provides examples of implementing several design patterns for handling various types of user interaction.


Examples of Asynchronous Data Supply From a Data Thread

Additional example programs in the SimpleViewerThread directory provide sample implementations of asynchronous data supply from a data thread
for C, C++, Java and C#. While existing SimpleViewer examples poll data on a timer, the new examples may be used to implement event-driven data updates.

The C example demonstrates the use of the ZeroMQ library for passing data from the data thread to the GUI. The rest of examples show an alternative
method of exchanging data between the data and GUI threads using a queue and thread locking for thread synchronization.

New Lat/Lon display indicators were added to the Value and State Display widget palette. They can be used to take a latitude and longitude values supplied as a Decimal Degrees (DD) and display them in the Degrees, Minutes and Seconds (DMS) form. The indicators use a Java Script transformation to convert Lat/Lon values from the DD notation to DMS.

Support for clipping layer output to a specified lat/lon box has been added to the GLG Mar Server. The clip box can be defined in the layer's LIF file. Clipping is supported for both image and vector layers.  Several clip types are supported to allow clipping vector features while allowing labels to extend outside of the clip box.

Fixed  "Window is too big, turning double buffering off" warning displayed when widgets from the Object Palette were added to a fixed-size drawing.

Disabled tooltips for disabled (not drawn) chart plots and excluded disabled plots' data from the extent queries via the GlgGetDataExtent method.